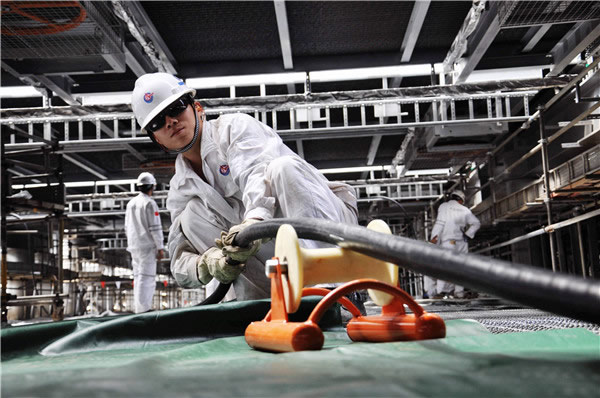 CNOOC Ltd, China's biggest offshore oil and gas producer, said on Tuesday that it willcontinue to set aside around 20 percent of its spending for oil exploration for this year,despite cuts in both expenditure and output due to falling oil prices.

The oil giant will cut its total budget to less than 60 billion yuan ($9.11 billion) this year,about 11 percent year-on-year.

But the percentage for exploration will remain at around20 percent this year, the Beijing-based company said. "Although the oil and gas industry is facing a huge challenge amid the recent plunge incrude oil prices, we will keep a certain level of spending on oil and gas exploration, which iswell above the industry's average, in order to achieve our mid- and long-termdevelopment," Zhong Hua, chief financial officer of the company, said at a news conferenceheld in Hong Kong.

He said that despite the lower capital expenditure, the company expects to achieve itswhole-year targets through cost control and efficiency enhancement.

CNOOC has lowered its production target for this year to 470 to 485 million barrels fromthe target of 509 million set in 2015, the first time in more than a decade.

Four new projects will come on stream for this year, with nearly 20 projects underconstruction, CNOOC said.

Brent crude prices have slumped more than 70 percent in the past 18 months, dippingbelow $28 on Monday after international sanctions on Iran were lifted, paving the way forincreased oil exports. Crude oil prices have squeezed the profits of many oil majors andalready fallen below the production costs of most Chinese oil companies, which areestimated at $40 per barrel, but experts said that it is necessary to maintain oil and gasexploration at a certain rate.

Lin Boqiang, director of the China Center for Energy Economics Research of XiamenUniversity, said that the company needs to continue its oil and gas exploration to secureenergy supply because the country still relies on oil imports.

NEXT: Mobile Internet under the Spotlight of China's Internet Development

Back to the previous page